As of now, RetroClip, our macOS app for instant replay screen capture, is free on the Mac App Store! To mark the occasion, I'm going to share some additional backstory and things I've learned since we introduced RetroClip.

Back in the winter of 2017, Nick Sivo and I were working on a Mac native GitHub code review app that we planned to release on the Mac App Store. It was basically a streamlined and standalone, non-software-as-a-service version of our former product Ship. I was procrastinating working on that project by code golfing what became RetroClip, and I justified this procrastination by a plan to trial trialware on the Mac App Store via RetroClip.

I was initially attracted to the idea of trialware for our GitHub client on the Mac App Store because the Omni Group apps went that route. My plan was to try the same thing with RetroClip so that I could battle test my In App Purchase code, and then by the time we had our more ambitious product ready, we would have our payments process dialed in to go with it.

What actually happened was Nick and I moved on to other things, and we never did end up releasing that standalone GitHub code review app. But, meanwhile, the RetroClip pricing experiment went forward and the results are now in. In short, I don't recommend it!

First off, StoreKit, the API used to do In App Purchase, is just not all that stable, especially across a broad range of macOS versions. Without getting too much into the mechanics of how it works1, In App Purchase relies on communication between the app you're using and an App Store daemon process.

Unfortunately, the Mac App Store has a bit of a reputation for getting stuck. I wish I had some great technical analysis for why this is I could share here, but it's probably not one single root cause, and it's just common enough to be a problem but not common enough to show to the mechanic Feedback Assistant. If you've used the Mac App Store much (or the iOS App Store for that matter), I bet you're nodding your head right now. It just goes out to lunch sometimes, and typically the hang can be resolved by either waiting a little while, or killing the store daemon or rebooting the whole machine.

When you open up App Store.app and you go to download or buy something there, and you get an error or the download hangs or whatever, who do you blame? Apple! But when you download an app that has a trial or unlocks functionality via In App Purchase, and you try it and it doesn't work, who do you blame? That's right, the app developer!

And, honestly, you're right to blame the app developer! Whether a bug is in the OS or in application code (and the vast majority of the time it's the latter), as an app developer ultimately the buck stops with me. If some OS functionality isn't reliable, it's my responsibility to avoid it, which I have now done by just making the whole app free. That said, complaining about Apple bugs on a blog is a time honored tradition.2

Overall, only a small fraction of customers, well under 1%, ran into problems buying RetroClip via In App Purchase, and I think I was able to help everyone get things sorted over email. But enough people were affected that I felt bad about it, and there were enough that I wouldn't want to repeat the experience.

Some of the first inquiries we got about RetroClip were from software QA departments looking for a way to install RetroClip on a bunch of machines for a bunch of users. Apple has a thing for this, it's called Volume Purchase Program. But, it only works for the old school pay up front pricing models. If you're doing one time In App Purchase or a subscription to unlock functionality as your pricing model, as best as I can tell, you're out of luck for selling site licenses.3

So when people came asking about site licenses, I initially didn't know what to tell them, and I bungled my approach to the first several volume customers. Nobody is going to create App Store accounts and manually download and go through the In App Purchase process on dozens or hundreds of machines just for a $5 utility. What happened was the potential customers ended up not getting a useful tool and I ended up not getting money, so just a bad deal all around.

Eventually, I wised up and produced a non-App Store version of RetroClip. When somebody wrote in and asked for a site license, I just sent them an invoice on PayPal and gave them a link to download the unlocked app. I was just a small player selling a small app, so a low tech process was OK, but in general, some method of having a purchase process external to the Mac App Store seems to be necessary, which is unfortunate.

I'm happy to make RetroClip free. In some sense, it always should have been free, because what I got most out of it was the satisfaction of making it and making use of it myself. The idea of selling it was in service of something else that never came to be. And the idea of marketing it was just an inside joke between Nick and I that got out of hand.

Ship is now open source on github.com. You can access the code for the product at the following repositories:

All of the code is available under the MIT license. It is mostly "as-is", in the sense that we haven't done anything to the code since …

It's official, Ship.app is closed for business. As we promised back in March, June 30, 2018 was the last day of operation for Ship. We've shut down the servers powering the application and pushed one last software update to the application to display a shutdown message.

We are going to turn off Ship at the end of June, three months from now. Starting today, all subscriptions will go to $0, so everyone can use Ship for free for the remainder of the time. If you have a monthly subscription, you won't be billed again. If you …

We have a new app out on the Mac App Store. It's called RetroClip, and it makes taking instant replay video captures of your Mac's screen as easy as taking a screenshot. There is a browser based demo you can try if you're on a Mac or a PC (and …

Ship 2.6.10 is out! We've got a lot of fixes in this release, and some new features as well. Grab the update here or use the Ship → Check for Updates menu item in the app.

Ship 2.6.9 is out! This is primarily a bug fix release (as was 2.6.8 before it), but, hey, bug fixes are important too. Grab the update here or use the Ship → Check for Updates menu item in the app.

We occasionally get emails from …

Ship 2.6.7 is out with a variety of bug fixes and enhancements. The focus of this release has been to smooth off rough edges and to respond to customer feedback.

There are a couple of things I want to highlight in this release:

We've added syntax highlighting theming to Ship! Ship uses the same theme format as Xcode 8/9 and will automatically default to the current theme you're using in Xcode. To change your theme in Ship, use the View → Code Theme menu. To add new themes, you can use the theme …

You can now share Smart Queries using Ship! Here's how it works:

We've got a new update to Ship with a keyboard activated search window to make it even quicker to get at the repo, organization, smart query, or file you're looking for. As usual, there's a handful of bug fixes in this update as well. Download here.

We have two new categories of smart query predicates in this release:

We just pushed the deployment button on Ship 2.6 with support for selecting which GitHub repositories you want to work with (download). This means that you can now use Ship to follow along with your favorite open source projects on GitHub.

To get started with this feature, use the … 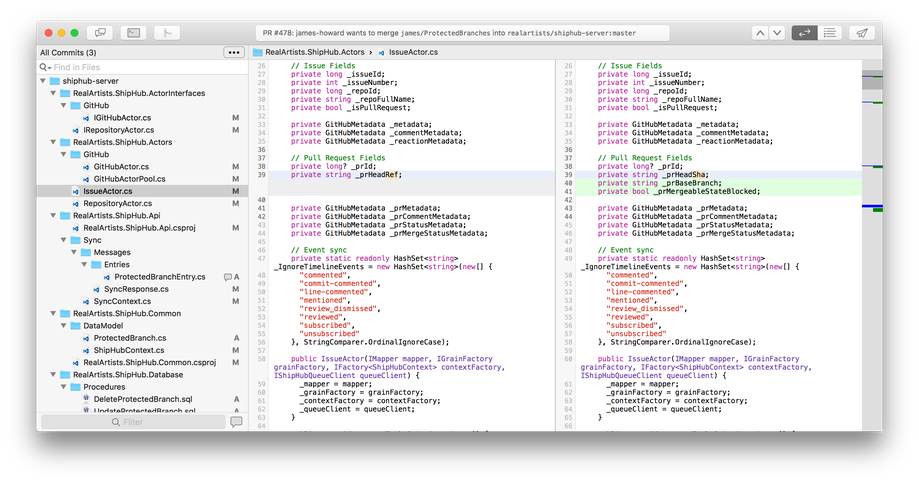 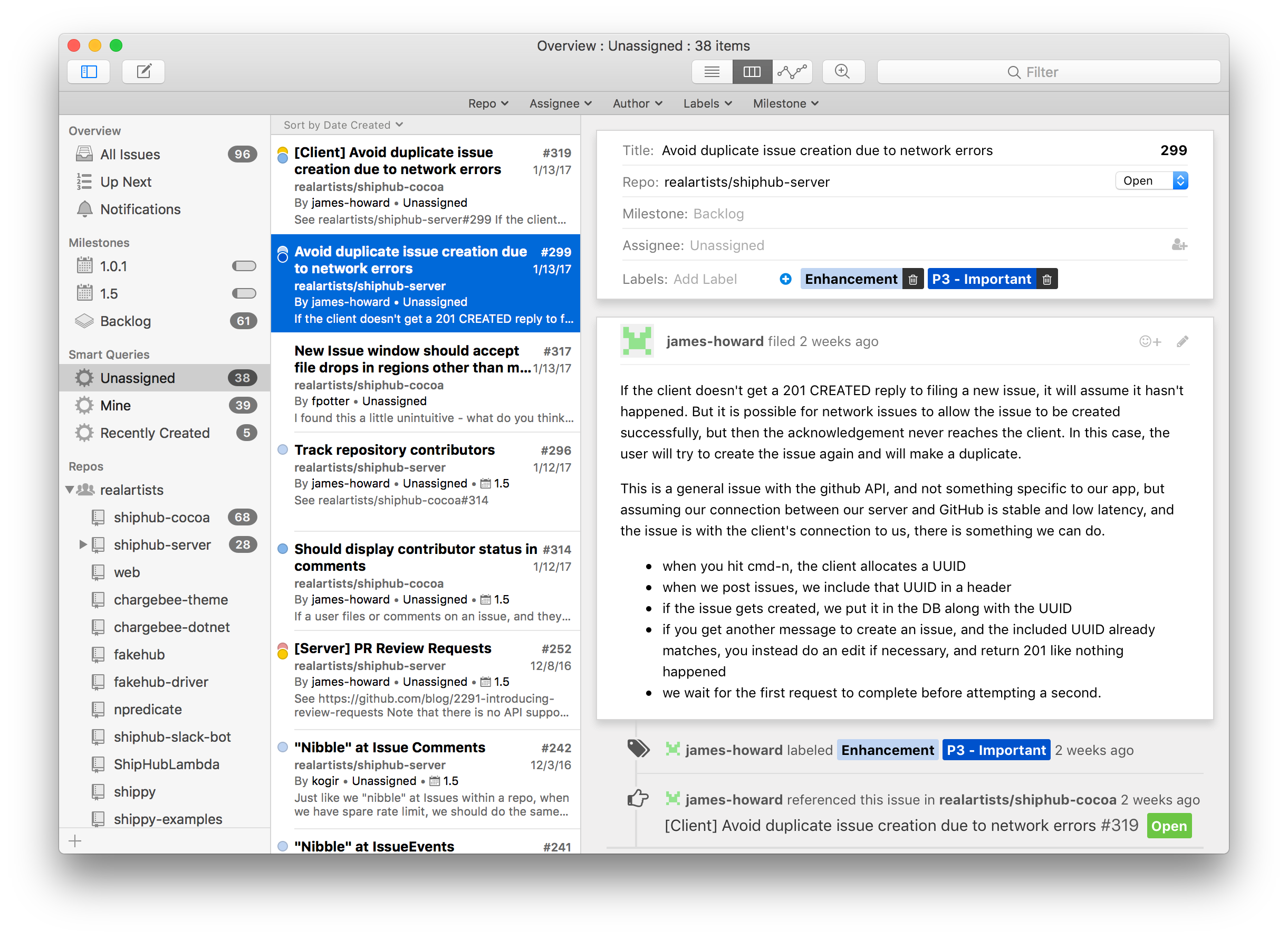 A year ago, when we released Ship 1.0, we knew that GitHub was the most popular place for software projects. This is even more true today. So, when …

Nick Sivo and I are releasing Ship, an issue tracker for software projects.

We started with the premise that it should be a native app in recognition of how frequently it ought to be referenced when used properly. We then decided to design around these features that we are uniquely …